Thomas GRAINGE of Bowes 1700, Will and Bond

WILL
Made 9.9.1696 Proved 25.4.1700
Transcribed by Carol Metcalfe from original documents available at the WYAS

In the name of good amen the ninth day of September in the eight yeare of the Reigne of our Soveraigne Lord William the third by grace of god of England Scotland France and Ireland King defender of the faith, in the yeare of our Lord god 1696, I Thomas Grainge of Bowes within the county of York yeoman being in Health of body sound in mind and of good and perfect memory praised be Almighty god for the same but calling to mind the uncertaintie of this transitorie life heare on Earth and that all flesh must yield unto death when it shall please god to call, and being desireous to setle things in order before I leave this world for the satleing of peace and unity hereafter amongst my children and relations, doe make and ordaine this my last will and testament in manner and forme following.
First and principally I commit my soule to Almighty god my maker hopeing for full remission of all my sins and my body to the Earth from whence it was taken, to be buried in such Christian and decent manier as to my Executrixes hereafter named shall be thought meete and convenient and as touching my worldly estate and such things as the Lord in mercy far above my desert hath bestowed upon me, I give and dispose the same as followeth.

Impr I give and bequeath unto Leonard Grainge my sonn all my house? and tenant right of all that part of the farme that I now posess and enjoy under the Right Hon the Earle of Darby, to enter of and to the same, at and upon the first day of May next falling after my decease, upon condition that he shall pay forth of the said farme unto Jane Burrill, Susana Grainge and Ellin Grainge my daughters to each of them ten pounds a peece, within six months next after my decease, but if it shall happen that my said son Leonard Grainge doe or shall refuse to pay unto my said three daughters the said severall sums of ten pounds a peece within six months next after my decease as aforesaid then I revoke this my gift and satlement of the farme to him and I doe give my sole title and tenant right of the said houses and farme unto my said three daughters (to whit) Jane, Susana and Ellin, equally amongst them and if any of my said three daughters shall happen to die and leave this world before the said childs pts shall fall due then my mind and will is that the childs pt belonging to such a daughter deceasd shall be equally divided betwixt the survivors.

Item I give and bequeath unto the said Jane Burrill, Susana Grainge and Ellin Grainge my said three daughters all my title clayme interest and demand whatsoever either by law or equitie, that I have to one halfe of one parcell of land lying and being at Dalleygill within the county of York called Scutscar [see Laverton and Dallowgill tithe article] and all my right and title of one mortgage, taken of William Rider and also all my right and title sume and sums of money that I can any maner of way challenge or demand by vertue of being Executor of the last will and testament of Jane Outhwit of Dalleygill deceasd or otherwise ?heresoever?

Item all the rest of my goods and chattels after my debts paid and funerall expences dischargd I give and bequeath unto the said Jane Burrill, Susana Grainge and Ellin Grainge my said three daughters makeing them joint executrixes of this my last will and testament.

CONDITION
The condition of this obligation is such that if Jane the wife of the above boundan John Burrell and Ellen Grainge doe well and truly execute and performe the last will and testament of Thomas Grainge late of Bowes deceased and do pay his debts and legacies so far as his goods will extend and law shall bind them if they do exhibit into the said registry a true and perfect inventory of all and singular the goods, rights, credits, chattels and cattells of the said deceased, and do make a true and just account of the same when they shall be thereunto lawfully called, and moreover if need require, enter into a further bond with more sufficient sureties for performance of the premsises as the judge of the said court for the time being shall think requisite and needfull. And lastly do save and defend and harmless keep the above named Commissary, and all his officers and ministers, against all persons by reason of the premises then this present obligation to be void and of none effest, or else to remain in full force and virtue. 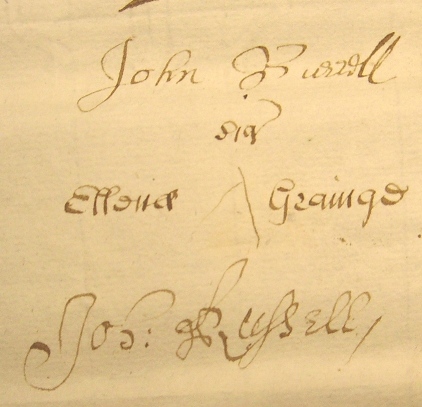