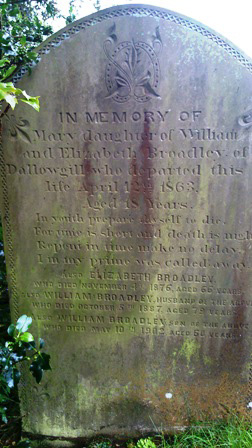 IN MEMORY OF Mary daughter of William and Elizabeth Broadley of Dallowgill
who departed this life April 12th 1863. Aged 18 years.
In youth prepare thyself to die, For time is short and death is nigh,
Repent in time make no delay, I in my prime was called away.
ALSO ELIZABETH BROADLEY WHO DIED NOVEMBER 4TH 1876 AGED 66 YEARS.
ALSO WILLIAM BROADLEY HUSBAND OF THE ABOVE
WHO DIED OCTOBER 5TH 1887 AGED 79 YEARS.
ALSO WILLIAM BROADLEY SON OF THE ABOVE
WHO DIED MAY 10TH 1902 AGED 60 YEARS