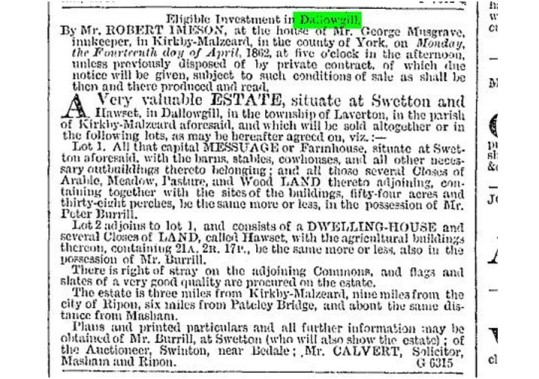 Eligible Investment in Dallowgill
By Mr ROBERT IMESON, at the house of Mr George Musgrave, innkeeper, in Kirkby Malzeard, in the county of York, on Monday the Fourteenth day of April, 1862, at five o’clock in the afternoon, unless previously disposed of by private contract, of which due notice will be given, subject to such conditions of sale as shall be then and there produced and read.
A Very valuable ESTATE, situate at Swetton and Hawset, in Dallowgill, in the township of Laverton, in the parish of Kirkby Malzeard aforesaid, and which will be sold altogether or in the following lots, as may be hereafter agreed on, viz.:-
Lot 1. All that capital MESSUAGE or Farmhouse, situate at Swetton aforesaid, with the barns, stables, cowhouses and all other necessary outbuildings thereyo belonging; and all those several Closes of Arable, Meadow, Pasture and Wood LAND thereto adjoining, containing together with the sites of the buildings, fifty four acres and thirty eight perches, be the same more or less, in the possession of Mr Peter Burrill.
Lot 2. Adjoins to lot 1, and consists of a DWELLING-HOUSE and several Closes of LAND, called Hawset, with the agricultural buildings thereon, containing 21A 2R 17P, be the same more or less, also in the possession of Mr Burrill.
There is right of stray on the adjoining Commons, and flags and slates of a very good quality are procured on the estate.
The estate is three miles from Kirkby Malzeard, nine miles from the city of Ripon, six miles from Pateley Bridge, and about the same distance from Masham.
Plans and printed particulars may be obtained of Mr Burrill, at Swetton (who will also show the estate); of the Auctioneer, Swinton, near Bedale; Mr CALVERT, Solicitor, Masham and Ripon.