The following records, from various sources, show who has occupied and farmed Bowes Farm in Dallowgill for over 400 years. In some of the early documents, it seems likely that Bowes referred to an area with more than one house, rather than the one farm of that name today

1985
The cart shed at the front of Bowes was converted into a milk house for the bulk tank. During the work a date of 1885 was uncovered, inscribed when the cart shed was built exactly 100 years previously

1 April 1981
The Chandlers bought the farm when the landlords, Leeds Corporation, offered tenants the opportunity to buy their properties 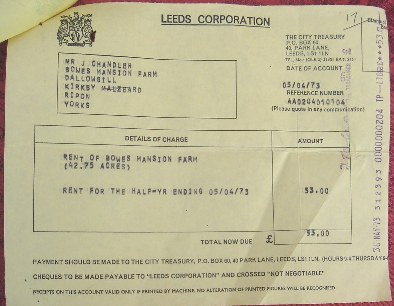 1971
James and G Dora Chandler and family moved into the farmhouse at Bowes from the Schoolhouse, after the school had closed. The farmhouse had been empty for about 9 years

1962 onwards
James Chandler, son of George and Dora, continued to farm at Bowes after his mother retired. He also took over the tenancy of the land at Manchester House in about 1968.

1962
Dora Chandler retired from farming at Bowes and moved to Winksley. She had been a widow since 1937 when her husband George died. See Memorials at Dallowgill Church and the Chapel of Resurrection

8 December 1961
Kate Burrill was at Bowes with her daughter Dora when she died. See Memorial 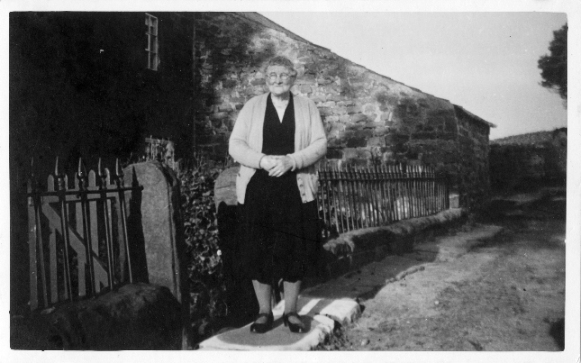 1958
Robert [Bob] Burton was living at Bowes with the Chandlers when he died in 1958. Memorial
For many years he had lived at Swetton and worked for Kate Burrill, Dora Chandler’s mother

1938 Bowes Mansion Tenancy Agreement
After the death of George Chandler, his wife, Dora took over the tenancy of the farm from 6th April 1938. The yearly rent was £33, 1 shilling and sixpence for the 42 acres and 3 roods [42.75 acres] including moor rights on Dallowgill Moor for 66 sheep. 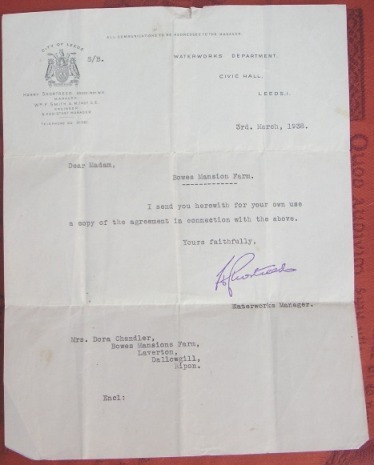 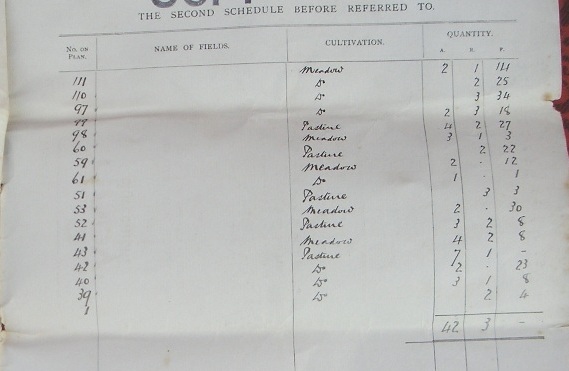 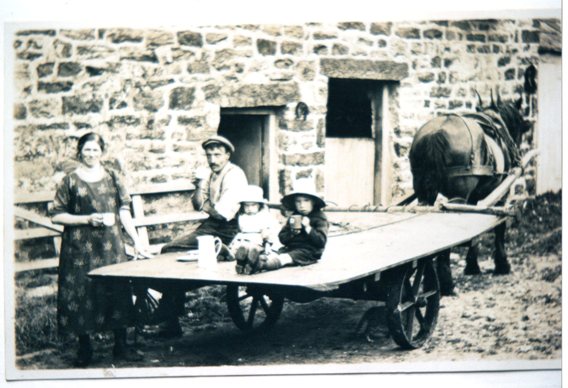 c1926 The Chandler family at Bowes

1919 Bowes Mansion Tenancy Agreement
When George Chandler married he took over the tenancy of the farm from his father, Robert Henry, who retired to Glasshouses near Pateley Bridge. The yearly rent was £31 and 10 shillings for the 42 acres and 34 and a half perches, including moor rights on Dallowgill Moor for 66 sheep. The land consisted of fields around Bowes Mansion and a block of land at Dallow. 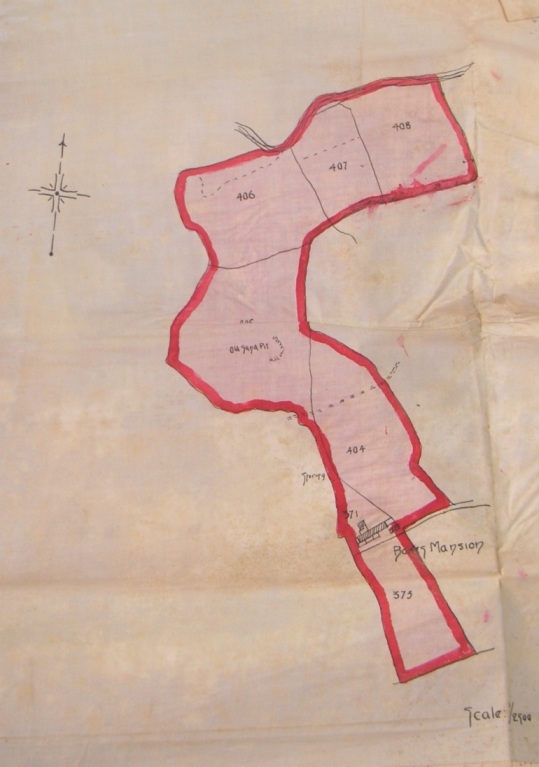 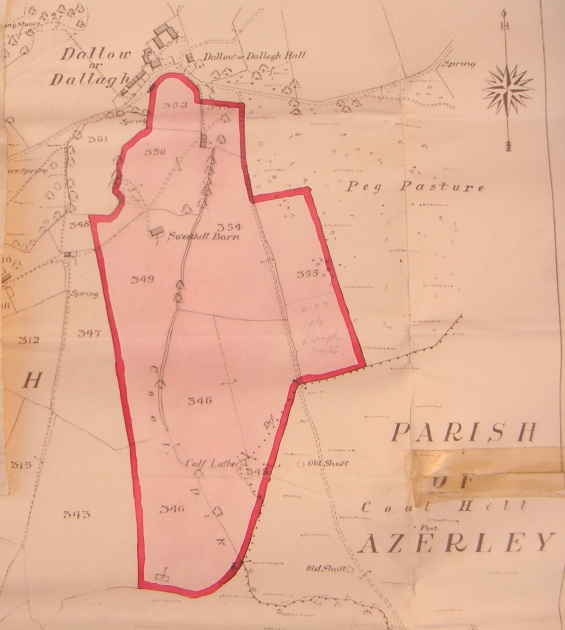 George was born at Carlsmoor on 10th March 1888, the son of Robert Henry [farmer and joiner] and Sarah Jane [neé Barker]

Dora was born at Swetton on 30th December 1891, the daughter of William John Burrill and his wife Kate [neé King]

1913 Shepherd’s Guide
An entry in this book describes the sheep marks used by Robert H Chandler, of Bows Mansion Farm, Dallowgill, Kirkby Malzeard, Ripon,to identify his sheep grazing on the moor.
‘Marked with a cross on the near [left] ribs, a sword on the far [right] ribs, with RHC on both horns’

[Kirkby Malzeard parish records]
Robert Henry was born at Laverton in 1850, the son of John Chandler and Mary [neé Auton]

Sarah Jane was born at Galphay Moor in 1854, the daughter of Matthew Barker and his wife Margaret [neé Calvert]

About 1906
Leeds Corporation became the landlord when they bought Bowes Farm along with most of Dallowgill, with a view to building reservoirs to provide water for the city 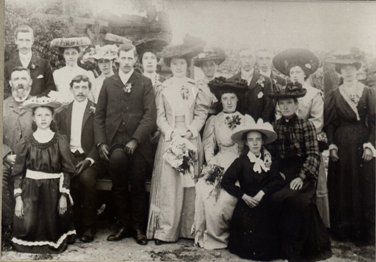 1901 census
Robert Henry Chandler, aged 50 [farmer and joiner] and his wife Jane, aged 47 and 4 of their children were at Bowes:
William aged 18, George and Elizabeth, the twins, aged 13 and Maggie, aged 9 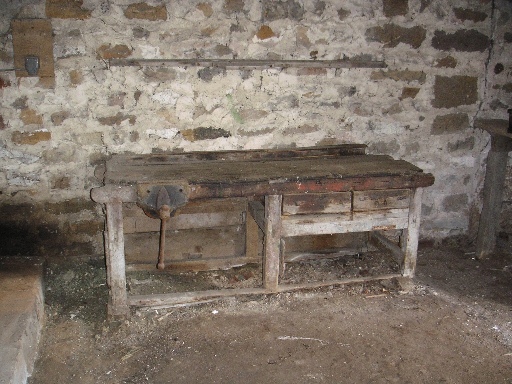 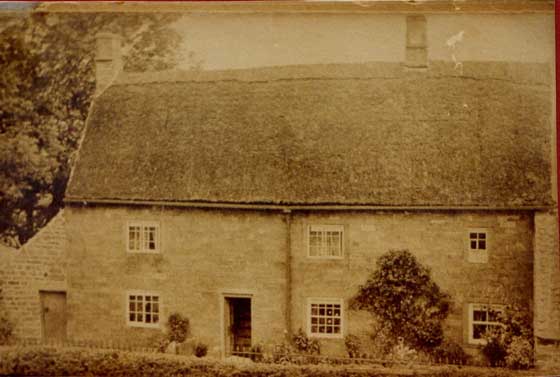 Bowes Farm in the late 1890s
The same Japonica tree was still growing on the front of the house until very recently, covering an old front doorway. The roof was slated circa 1900 [Dora Burrill, mentioned above, remembered this taking place when she was a child]

Joseph and Amy King were Dora Burrill’s uncle and aunt

Joseph Cundall King was born in 1861 at Lunterstone, the son of Ann Cundall
[birth certificate & 1861 census]

Priscilla and John had married in the spring of 1875 [www.freebmd.org.uk]

1891 census
John West [farmer] aged 49 and his wife Priscilla aged 41 were at Bowes House with 3 children:
Squire aged 13 who was born at Leeming in Yorkshire
Annie aged 11 who was born in Nottinghamshire at Eastwood
John Hedley aged 9 who was born at Hampsthwaite

1885
In this year the cart shed was added at the front of Bowes to the right of the house and this date was inscribed inside it. It had a pan tiled roof. It is possible the coal house was also added to the west end of the house as it looks more recently pointed in the photograph above.

1871 census
Willis Lofthouse [farmer of 54 acres], a widower, aged 50 was at Bowes with his family, Matilda aged 23, Reuben aged 21, Priscilla aged 19 and Jane Elizabeth aged 18, all born in Dallowgill

1861 census
Willis Lofthouse [grocer and farmer of 57 acres] aged 40 and his wife Jane aged 41 were at Bows with their children Alfred aged 14, Reuben aged 11, Jane Elizabeth aged 8, Alexander aged 6 and Caroline aged 4, all of whom were recorded as born at Laverton
[Priscilla aged 10 was with her grandparents at Hosley, Aldfield]

Willis and Jane had married at the end of 1843 [www.freebmd.org.uk]
They were at Mallaby House in 1851 census

Henry Lofthouse, [who was born in Dallowgill in 1799, the son of Ralph] had married Ellen Horner on 14th April 1819

He died at Grantley, aged 67, and was buried at Dallowgill on 6th April 1867. See Memorial [Dallowgill parish records]

1841 census
Henry Lofthouse [farmer] aged 41 and his wife Helen also 41 were at Bows with 5 of their children, Caroline aged 13, Bridget aged 10, Marria aged 7, Henrietta aged 4 and Frederic aged 1, plus William Whittaker aged 40
[Their son Willis was working at Dallow Hall]

1838 Tithe map
Bowes was owned by Rev William Kendal, vicar of Downholme and occupied by Henry Lofthouse
He had approx. 13 acres, field no.s 638-641, 644-50 and also approx. 8 acres in 3 separate allotments field no.s 745-747, situated below the turning into Dallowgill. 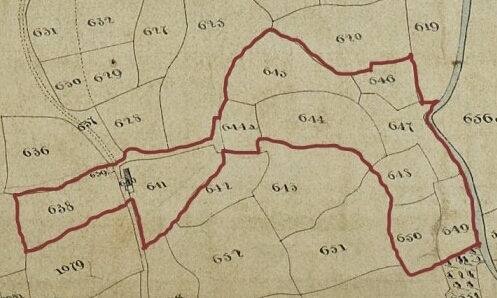 Newspaper articles 1834-1835
Henry and Ellen Lofthouse of Bowes gave evidence at the trial of Ursula Lofthouse of Crosshills who was found guilty of murdering her husband Robert Lofthouse, Henry’s brother 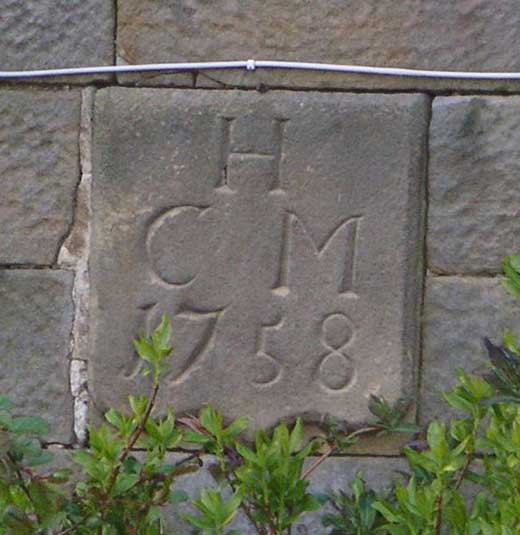 Date stone on the front of the house over an old front doorway
Almost certainly Christopher Hebden and his wife, Margaret, who were married in 1751

YAS online catalogue
https://explore.library.leeds.ac.uk/multimedia/18822/YASDD33.pdf
1690 Item E6
28.6.1690. Betweene William Horner of Bowes in Dalleygill, Weaver and Elizabeth his wife and William Horner of Bowes, Yeoman, father of the said William Horner, 1st and John Wood of Misses. Co. Yorks, Husbandman, Other.
Ref. to indenture of Earl of Derby. Cottage or tenament with appurts. in Bowes, at yearly rent of 7/6d – 4 acres, 3 roods etc.

1685/05/24 Kirkby Malzeard parish records
The Holdsworths were at Bowes
Beatrice Holdsworth of Bowes, Geo Steuard of Dallagill and Geo Reynard jun were the sponsors at the Christening of Geo Hutchinson son of Geo of Dallagill

1685/01/14 Kirkby Malzeard parish records
Thomas Holdsworth of Bowes, Mr Wm Man of Bramley and Margery Baine of Gruelthorpe were the sponsors at the Christening of Wm Inman son of Charles of Kirkby Malzeard

1684/08/08 Kirkby Malzeard parish records
Mrs Beatrice Holdsworth of Bowes, Major Richmond of Skeldene and Mrs Hanah Carlile of Skellgill were the sponsors at the Christening of Sarah Russell daughter of John of Misses

20.3.1679 See YAS online catalogue
A lease made for a cottage and 4-5 acres of land at Bowes between the Earl of Derby on one side and William Horner, John Horner and Rebekah Horner on the other

1596 Masham Peculier Wills
Will of Gilbert Horsman of Bowes par Kirkby Malzeard
This will is very feint but one line stands out in which he leaves a sum of money annually to George Owtwhat until he is 16 years of age ‘if he will be governed by my wife and her friend’ !!